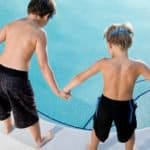 Chlorine is like the steamed spinach of swimming pool ownership – there may be a few strange folks out there who genuinely like it, but most people only accept it begrudgingly. If it weren’t so effective at keeping a swimming pool in good health, it’s safe to say nobody would want chlorine anywhere near their home. It’s hazardous to store and handle. It irritates eyes and skin. And – much like steamed spinach – it smells bad.

It’s not surprising then that a lot of current and future pool owners take a hard look at the many chlorine alternatives on the market. Of these, salt water chlorination is by far the most popular. Salt water systems certainly have advantages over chlorine in many respects, but as with just about everything, there’s a downside as well. To help you put it all in perspective, here are the major pros and cons of salt water pools.

But First, a Little Background

If you haven’t read a lot about salt water systems, there are a couple of facts that may surprise you:

2. Strictly speaking, salt water pools are not chlorine free. Rather, these systems create their own chlorine using salt through a process called electrolysis. The real difference is that you don’t have to add chlorine directly to the water.

With those two myths busted, let’s move on to the case for, and against, salt water chlorination.

Here are some of the benefits of salt water systems that seem to be driving their popularity:

Gentle on Eyes and Skin. Chlorine levels are generally lower with a salt generator. People who are sensitive to chlorine often report fewer irritations when using these pools.

Safer Than Chlorine. In tablet or liquid form, chlorine can be dangerous to store and transport. Studies have shown that chlorinated water may also pose a long-term health risk, which may not apply to salt water systems to the same extent (on the other hand, they do still produce the same disinfection byproducts as traditional pools).

“Soft Water” Feel. If you have a water softener in your home, you know that the addition of salt makes water feel smooth and silky to the touch – like rain water. Most people prefer this to the sometimes-abrasive feel of chlorinated water.

Less Maintenance. Pool maintenance is more “hands-off” with a salt water system, as the salt cell simply produces chlorine as needed. That said, you still have to monitor chlorine levels periodically to make sure everything is working okay.

Given those advantages, it would seem that salt water chlorination is the perfect solution to the many hassles of chlorine. Not so fast. Here are some qualities of salt water swimming pools that might make you think twice:

More Expensive. A salt water system requires a hefty initial investment, which may total $5000 or more. Of course, with the money you’re saving on chlorine, the system could pay for itself in a few short years. But, as we pointed out in our article devoted to the cost question, any potential savings are theoretical and dependent on a lot of factors. In other words, it’s quite possible that you’ll never recoup your money.

More Complex. If you have a sanitation problem with a typical swimming pool, the answer is often to add more chlorine (or some other chemical). With modern electronic salt water systems, any problems that crop up are more likely to require the help of an experienced technician.

Potentially Damaging to Pool Accessories. There are reports of salt water systems damaging fixtures, heaters, liners, underwater lighting, and even masonry work. However, some of this information may be outdated or apply only to older equipment. Also, as with any system, a lot depends on whether it is properly installed and maintained.

So, what’s the verdict? Judging by their soaring sales numbers, a whole lot of people find the advantages of salt water pools to outweigh the negatives. Once confined to luxury hotel pools, these systems are now popping up in the backyards of average pool owners all over the world. If you can afford the steep initial cost (keeping in mind that it’s offset at least somewhat by the money you save on pool chemicals), it’s hard to argue against the virtues of a salt water pool.

That said, if you’re adamant about ditching chlorine, a salt water pool might not be what you’re looking for. Instead, you may want to think about a less-established alternative, such as a UV or ozone system – or even a natural pool that incorporates plants to keep the water clean. Of course, all of those options have their own pluses and minuses, which just underlines the fact that nothing is simple when it comes to making decisions about your pool.