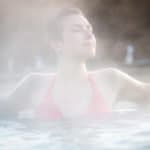 In terms of popularity, chlorine sits somewhere between traffic jams and root canals. Bromine, though not as well known, doesn’t fare much better. What many hot tub owners want is a chemical-free sanitation method – or at least one that doesn’t come with unpleasant odors and skin irritation.

It’s much the same in the swimming pool world. In both industries, demand for chlorine alternatives is booming. And in both cases, the solution many people are turning to is salt water sanitation.

But are salt water hot tubs actually better, or is this just another fad that’s destined to blow over in a few years? To help you decide, here are some of the pros and cons of salt water spas.

How Does a Salt Water Hot Tub Work?

But first, it’s crucial to point out what a salt water hot tub is – and what it isn’t. What it is, is an alternative way to get chlorine into your hot tub. What it isn’t – despite what you may hear elsewhere – is chemical-free or chlorine-free.

Salt water hot tubs produce chlorine through a technique called electrolysis. In a nutshell, rather than adding chlorine directly to the hot tub, you add salt that the system uses to create chlorine. While the mechanism may be different, the result is the same – chlorine in the water, killing algae and bacteria.

Despite the above caveat, there are some real differences between salt water hot tubs and their traditional counterparts. Here are some of the reasons salt water spas are so “hot” right now:

Softer Feel. One thing you notice right away when slipping into a salt water hot tub is that the water feels extra silky. Because hot tubs are all about sensory enjoyment and blissful relaxation, the feel of the water is more than just a minor detail. 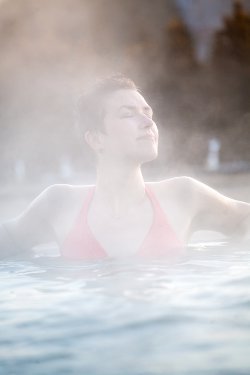 Many people prefer the soft feel of salt water.

Better For Sensitive Eyes and Skin. There’s a lot of anecdotal evidence that salt water chlorination is gentler on the eyes and skin. However, to be fair, a lot of the bad experiences people have with chlorine-treated swimming pools and spas are likely due to poor maintenance – not the chemicals themselves.

Less odor. If you’re bothered by the smell of traditional hot tubs, your nostrils might be more content with a salt water unit. Most people report that their skin doesn’t pick up as much chemical smell, either.

Easier Maintenance? Salt water spas are known for being easier to maintain. There’s a definite advantage in not having to handle spa chemicals, or store them around the house. However, there are other maintenance tasks that are unique to salt water systems, so it’s debatable whether they’re more or less work overall.

Salt water spas also have their detractors. Here are some of the potential downsides:

More Expensive. Whether we’re talking standalone units or built-in systems, salt water chlorinators are pricey ($500 or more). Having said that, you will save money on spa chemicals, which offsets the initial cost to some extent.

Corrosive. Salt is corrosive to metal fixtures – a particular concern for salt water hot tubs as compared to swimming pools. This generally isn’t an issue if the system is used at proper levels, but in the real world, things don’t always happen properly.

Too Weak? There’s some doubt about whether salt water chlorination is as effective as traditional forms of water sanitation. Since hot tubs (especially public ones) are well-known germ magnets, this is no small matter.

Salt Water vs. Bromine. Finally, there’s already an effective chlorine alternative available to hot tub owners – and it doesn’t cost a fortune. Bromine has many of the same downsides as chlorine, but many people find it easier to tolerate.

If you have space and budget, a hot tub offers benefits that are both recreational and therapeutic. But whether you should choose salt water vs. chlorine (or salt water vs. bromine) is a tougher question. This much is certain: You’re more likely to make the right choice if you’re armed with all the facts.