A pool owner should always be wary of trends. After all, a swimming pool and its various features – provided they’re well-built – are bound to outlast many of the fads of the day. It’s far more important for a pool to fit the long-term needs of its owner than to wow people at the first pool party.

That said, many of the current trends in pool design probably won’t fall by the wayside anytime soon. They’re being driven by technological improvements, a desire on the part of homeowners to be more eco-friendly, and higher expectations for what a poolscape can be.

In short, whether you’re planning a new pool or making changes to an old one, it never hurts to be aware of the latest trends. Many of them represent outright improvements over long-established ways of doing things. Here are seven backyard pool ideas for 2015 that are definitely worth your attention.

Five or ten years isn’t that long in the lifespan of a swimming pool, but it’s an eternity in the world of technology. While the amount of maintenance involved in pool ownership is still a major barrier for many people, that barrier is being lowered thanks to automated systems that are increasingly being built into new pools. With these systems, mundane tasks are computer-controlled, and can run either automatically or through an app on your smartphone. 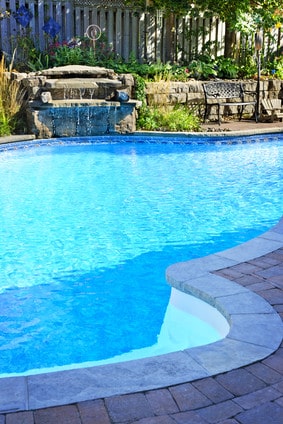 You’ve probably heard the word staycation. Annoying buzzword or not, it’s one way to describe the outlook of homeowners who aren’t content with a vanilla backyard pool. That means increased interest in “luxury” features such as:

The idea is to maximize your investment in luxury features while it’s still affordable to do so. Adding major features later on is often prohibitively expensive.

Pool owners are continually looking for ways to add visual appeal to their poolscapes, and glass tile certainly fills the bill. Glass pool tiling looks dazzling whether it’s at the waterline, adorning pool steps, or covering the whole pool interior. It doesn’t just shine in the looks department, though. It’s also more durable than ceramic tile – or any other type of pool surface, for that matter.

This trend is no Johnny-come-lately. People have long been searching for something other than chlorine to sanitize their pools, and salt water systems have emerged as the most popular alternative. While they’re not truly “chlorine-free” and come with their own pros and cons, salt water systems are now commonplace in residential swimming pools.

For many years, freeform pools were the trendy choice. However, pool installers are reporting that classic geometric shapes – squares, rectangles, circles, etc. – are making a comeback. It’s hard to say exactly what’s behind this trend. Maybe it’s more of a reversal of the freeform trend, back toward shapes that are more space-efficient and harmonious with modern architecture. 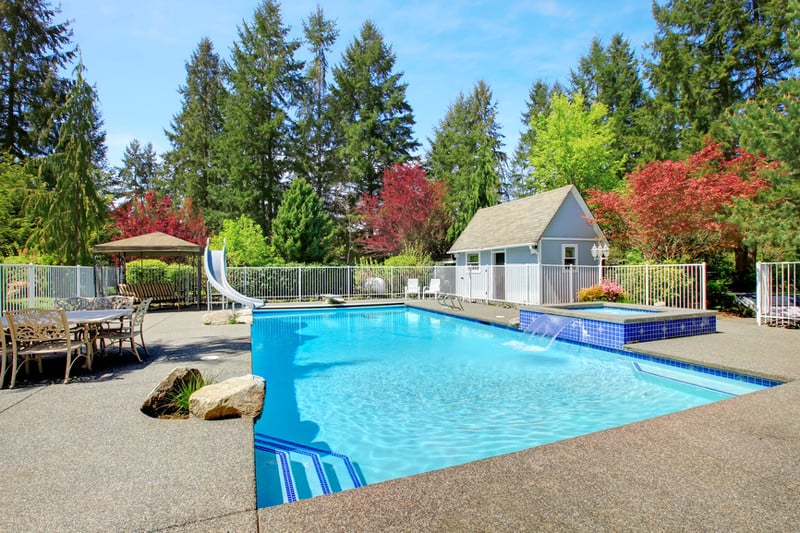 Geometric pool shapes are back “in”

When it comes to aesthetics, few things have had a bigger impact on pool design than the rise of LED lighting. LED pool lights come in a variety of colors, and can even be programmed to create beautiful underwater light shows. Best of all, they’re relatively affordable to install, especially when you factor in the energy efficiency savings they bring over the long term. Bottom line, it’s easy to see why LED lighting is a popular choice for both new pool installations and renovations.

The desire of homeowners to spend more time outside has driven many of the trends in home design over the past few years. This means that a swimming pool is more likely to be surrounded by things like an outdoor kitchen, bar, fire pit, plush furniture, shower, and so on. While this trend isn’t exclusive to pool owners, having an inground pool in your backyard is powerful motivation to join the ranks of outdoor living enthusiasts.

Intrigued by any of these trendy pool ideas? Before you get too far, make sure that “hot” new feature fits your goals (and your budget – but that goes without saying). Having a fashionable backyard pool is great and all, but the only person whose opinion really matters is your own.