For many homeowners, the idea of an outdoor shower might seem like an extravagance. It might even lead some to wonder whether this “outdoor living” craze has gone too far. After all, if you’re showering outside, what won’t you do? (On second thought, don’t answer that.)

Pool owners have a different perspective. For them, an outdoor shower is the height of convenience, allowing people to quickly rinse off before and/or after a swim. And while owning a fully tricked-out outdoor shower no doubt appeals to a lot of pool owners, that’s just one option. If you’re only interested in the practical benefits, you can put together a no-frills version with little more than a garden hose and a sprayer.

Like swimming pools, pool showers come in a lot of different forms. They run the gamut from fancy to barebones based on the following characteristics:

Plumbing/Heating. At its most basic, a pool shower could be a simple shower head mounted on a wall (or tree!) and fed with cold water from a garden hose. The easiest way to get warm (or slightly less chilly) water is to stretch out the hose so it has ample space to warm in the sun. However, more permanent setups are fully plumbed with hot and cold water.

Enclosure. A rudimentary pool shower can be out in the open, perhaps shielded by a plain old curtain. Others are housed in stalls or other small structures, or incorporated into pool houses. The enclosure itself can be as basic or as elaborate as you like. The possibilities are endless.

Additional Options. An outdoor shower can also be dressed up with a wide array of other features, including towel holders, seating, cabinets, lighting, solar heating, or even a separate changing area.

The best place to build an outdoor shower is either near the pool or near the house. Obviously, if your pool is right next to your house, then the decision is simple. If it’s farther away, things get a little more complicated.

A lot depends on how you plan to use the shower. If it’s solely for rinsing off after a swim, then it makes more sense to put it as close to the pool as possible. On the other hand, if you have a variety of things in mind, you might want to put it closer to the house – or at a midway point where it’s most convenient for all the uses you have planned.

Practical concerns could also figure in. For example, putting the shower close to the house makes it easier to tap into your home’s water supply.

An outdoor pool shower could be a good candidate for a do-it-yourself project, depending on your level of handiness and the complexity of the design. You can find articles online that walk you through the process. There are even outdoor shower kits that give you the parts and instructions to assemble a shower with minimal knowledge. 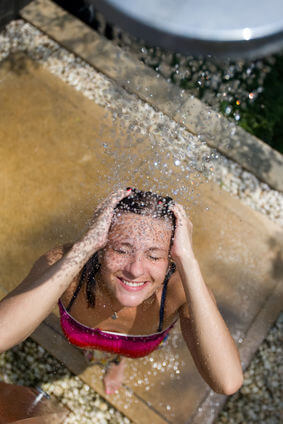 For more difficult jobs, you’ll likely want to hire an experienced contractor. It’s often better to include it with the initial pool installation so it integrates well with your pool design. On the other hand, as pool features go, it’s one of the easier ones to put off until later.

An outdoor shower can cost anywhere from $200 to $10,000 or more. In other words, it’s almost pointless to talk about price until you narrow down what you’re looking for.