A swimming pool is a hole full of water in your backyard. It’s tough to come up with a more detailed definition than that, because pools vary enormously. There are major differences even among prefab pools – once you get into custom installations, forget about it.

As we’ve said often before, the only limitations on a custom pool design are your budget and your imagination. This site mostly focuses on the former, helping you stretch your pool installation dollar. For a change a pace, here are some pool ideas intended to goose your imagination without regard to cost.

In case that wasn’t clear enough, the following cool pool features aren’t exactly economical. But if you’re looking to build the pool of your dreams, one (or more!) of them might be exactly what you need. 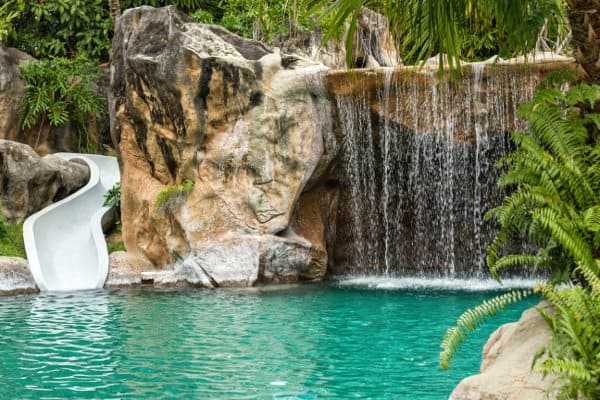 A grotto serves as the perfect romantic centerpiece of a lagoon-style pool.

So, what is a pool grotto? It’s a cave you can swim into, usually within a rock or rock-like structure. That structure often comes with a built-in waterslide or waterfall, among other features. With their naturalistic appeal, grottos work well in a tropical pool design to give you a sense of sneaking away to your own secluded slice of paradise.

A pool grotto can be a humble little nook to escape the sun, or a much more elaborate structure housing a spa, lounging area, colored LED lights, a bar, or even a large-screen TV! As you can probably imagine, pool grotto pricing is all over the map, but even lower-end options typically run $10,000 or more. 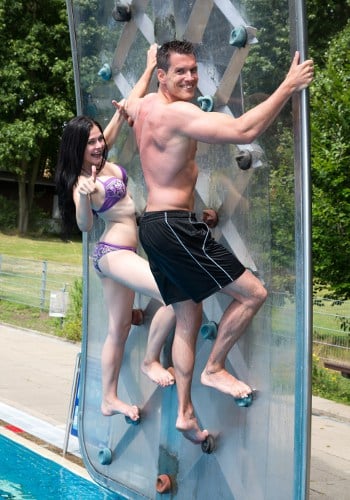 An aquatic climbing wall is the “height” of pool fitness.

Climbing walls have been popular for years, so it was probably just a matter of time before aquatic climbing walls became a thing. Now, as with every water park feature, they’re moving into residential pool installations.

A pool climbing wall attaches to the pool deck and typically extends up and at an angle, allowing climbers to plunge into the water when they let go. As such, climbing walls make an interesting alternative to a traditional diving board, albeit one that generally isn’t as aesthetically pleasing. Perhaps the best thing pool climbing walls have going for them is that they offer an enticing form of exercise, especially for older children and teens.

An aquatic climbing wall won’t necessarily blow up your pool budget on its own, but local pool regulations could be an issue. At the very least, you’ll need a deep end that permits people to safely drop into the pool without hitting bottom. 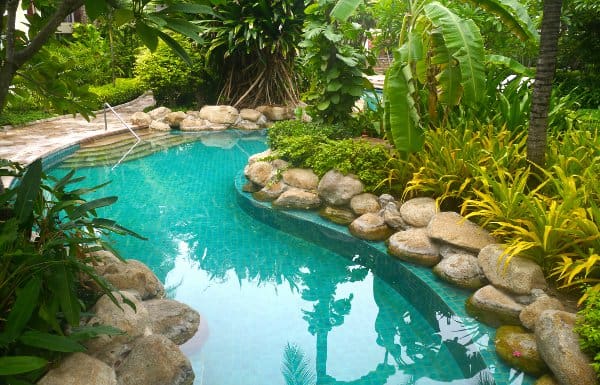 The best lazy rivers have nice scenery to look at as you float around.

Wouldn’t it be nice to float along in a lazy river any time you like – without fighting throngs of people at the nearest water park? That’s the dream of many people, and the reason why interest in residential lazy rivers is soaring.

A lazy river is essentially a long, shallow swimming pool with a current generation system that keeps inner tubes floating along. That’s just for starters, however. A genuinely memorable lazy river sends floaters on a tour of beautiful landscaping, possibly with a few adventurous twists such as waterfalls and dropoffs. A foot bridge over the lazy river pool is also a bonus, and may be of practical use for accessing parts of your yard cut off by the water.

A small lazy river might not cost much more than a typical high-end swimming pool, but the fact that’s it’s purely for floating makes it a true extravagance. Of course, you can always connect it up to a general-use swimming pool, but then you’re paying more. Besides money, another resource you need lots of is space, as no one likes going round and round in a small circle for hours.