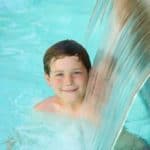 Building a swimming pool involves a lot of tough decisions, so it’s always nice when you come across a no-brainer. Deciding between different types of pool pumps is one of those easy choices. While single speed pumps were the norm for decades, variable speed pool pumps are clearly the best choice these days due to their massive advantage in energy efficiency.

But there’s always a catch, right? In this case, it’s a price tag that can be two or three times the cost of a single speed pump. However, this is a classic case of spending money upfront to save money later. While not every green or energy efficient pool technology makes financial sense, the savings you can achieve with a variable speed pump easily make it worth the investment.

If you want hard data, the U.S. Department of Energy estimates that a variable speed pump uses 50-75% less energy. To understand why, you need to know a few basic things about pool pumps and how they have traditionally worked.

While it’s not the most exciting feature to think about, a pump does yeoman’s work for a swimming pool. Its primary job is to keep water flowing through the filtration system so the water stays clean and clear. But it’s also used for other important tasks, such as:

These other functions need more energy than simple filtering. The trouble is, single speed pumps can’t adjust their energy use upward for those rare instances when it’s needed. They only operate at one speed, which has to be fast enough for the most demanding jobs. That means that for hours every day when the pump is running just to keep water circulating, there’s a lot of energy being wasted.

A complete explanation of how a variable speed pump saves energy would include a discussion of things like rpm, horsepower, and something called Affinity Law. But the basic version is easy to understand. A variable speed pump only works as hard as it needs to for the given task, and therefore uses as little energy as possible.

It’s not a question of if a variable speed pool pump will pay for itself, but when. You could recoup the extra money you pay for a variable speed pump in as little as a couple of years. It just depends on what your electricity rate is and how much you use your pump.

Obviously, the longer you keep your pool open each year, the faster the savings will accumulate. For people who live in California and other warm weather states, a variable speed pump is truly a no brainer. Those who heat their pools a lot or run water features can also expect a quick return on investment.

Still not convinced? Last but certainly not least, many utility companies offer rebates on variable speed pool pumps. This helps offset the higher initial cost, making it an even more attractive proposition.

As with any product, you can find reviews and comparisons of variable speed pool pumps online. Some of the major brands to look for include Hayward, Pentair, and Jandy. Before you get too far, talk with a pool professional and get their input. Not all models are necessarily compatible with your pool, or with the pool codes in your area.

Needless to say, it’s also wise to have a professional install the pump. Once the pump is installed, they can walk you through proper day-to-day operation. Fortunately, many newer pumps are highly programmable, so there’s very little for you to do – other than reap the benefits of a more efficient swimming pool.