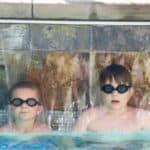 For many homeowners, a basic swimming pool is all that’s needed or desired. But for others, a backyard pool is a work of art that should be pleasing to the senses even when it’s not in use. For these people, water features are essential tools for adding motion, sound, and an overall dynamic feel to an otherwise static pool design.

Of course, water features aren’t for every pool owner. For one thing, not everyone has room for them – either in their pool or in their budget. Aside from those practical matters, a lot of people just prefer the serene, uncluttered look. Indeed, some of the best pool designs seem to follow the old maxim that there’s beauty in simplicity.

On the other hand, there’s something about the movement of water that’s endlessly fascinating for us humans. A water feature draws attention to your pool like almost nothing else can. To give you an idea of the possibilities, here’s a quick tour of some of the most popular water features for pools.

When people brainstorm about how to dress up their pool, the addition of a waterfall is often the first thing that springs to mind. In particular, a lot of people think of rock waterfalls, in which water trickles or flows over a carefully designed rock structure into the pool. This type of water feature is perfect for freeform pool designs, where it adds to the naturalistic appearance. On the downside, they can be pricey to install and maintain, as they invariably require their own pump systems.

A more formal version of a waterfall is a sheetfall, in which the water arcs into the pool in a thin sheet. This type of water feature fits in well with many geometric pool styles, where a rock waterfall might seem out of place. They’re also more standardized in appearance, easier to install, and because they can typically run off of your pool’s pump system, less expensive to operate.

Even cheaper to operate are scuppers, which are holes in a wall through which water pours down and into the pool. Scuppers can be as simple or ornate as you like, but regardless of what form they take, they always provide the soothing sound of running water.

Anyone who’s visited a good kiddie pool has seen these sprayers, which send a thin stream of water up into the air. These can be located in the shallow water of a tanning ledge (gusher) or on the pool deck (deck jet). Because you can turn these sprayers on and off at will, they’re one of the more affordable options.

Instead of falling in an arc, the water from a rain curtain drops straight down from an elevated beam at the edge of the pool. As with gushers, you can typically use rain curtains on demand, keeping ongoing costs at a minimum. In some cases, you can even control the pattern formed by the water (drops, solid sheet, etc).

Don’t get the idea that you can plug these into any old pool area. The right water feature depends on the pool’s style, how it will be used, and the preferred noise level (which in turn may depend on how close your pool is to your house).

Bear in mind that these are just some of the “standard” options you have when choosing a water feature. If you look around Houzz and other home improvement websites, you’ll run across cool features that go by a lot of different names. Many of them are so customized for the particular pool install that the term you use to refer to them is almost meaningless – you just gotta see them to understand what they are.

But despite their endless variety, water features all have pretty much the same goal – to add sound and visual appeal to your pool by making the water dance to the tune of your choice.