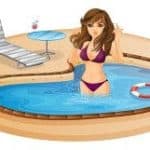 Generally the idea is to show off your inground swimming pool, not hide it away. However, a California-based company called Hidden Water Pools is aiming to change all that with an innovative design that’s gotten lots of buzz (and YouTube views) the past couple of years. The gee-whiz contraption is a decorative patio that converts into a swimming pool – and back again – with the flip of a switch.

Hidden Water Pools consist of a platform that can be lowered to any depth between one inch and about six feet. The system keeps water in reserve, which it then pumps into the newly materialized pool bed. According to the company, this magical transformation takes less than two minutes.

Wave of the Future?

A convertible pool has some clear advantages. The most obvious one is that it saves space. Among certain people, there’s a keen interest in swimming pool covers that you can walk on, which don’t really exist right now. This system accomplishes the same thing, giving you more usable space during the offseason and while your pool simply isn’t in use.

Safety is another big selling point. Conventional swimming pools pose a significant drowning threat to children, such that most places have laws requiring pools to be enclosed by a safety fence. A drained Hidden Waters Pool poses no such risk.

On the downside, the options for a pool like this would seem to be pretty limited. A lot of extras like diving boards and slides would look pretty silly on your patio. You can apparently get water jets installed for exercise, but that’s one of the few real options.

Also, while there would be a huge benefit in being able to convert a larger pool into usable space, small pools like these are pretty easy to tuck away in a corner of your property. If strapped for space, most people would probably opt for a simple compact plunge pool rather than pay extra for one of these systems. Which brings us to…

How Much Does it Cost?

The company website is coy about pricing for this pool/patio system, but states that it’s more expensive than similarly sized inground pools. The site also hastens to point out that their pools can save you money in the long run in maintenance costs. Because the water is stored underground and isn’t exposed to the cooling effects of air, it’s more efficient to heat. And because it’s not exposed constantly to the sun’s UV rays, pool chemistry is cheaper and easier to maintain.

Unfortunately, all of this appears to be more or less hypothetical at this point. While the company’s website remains operational, they apparently haven’t been very responsive to inquiries. There are rumors that the company is out of business or has filed for bankruptcy.

Update: Alas, the company’s website now appears to be shuttered. This, along with the fact that no one seems to be maintaining the company’s Facebook fan page, is a strong indication they have gone out of business. Based on the amount of interest in this unique design, it would be surprising if someone doesn’t come along to offer something similar. We’ll keep you posted. In the meantime, you might want to check out our article on small inground pools for other ideas.

Update 2: A company called Invisipools announced on its Facebook page that it has acquired Hidden Water Pools. They state that their initial markets will be Arizona, California, Nevada, Texas and Florida. They’ve taken over the old company’s website address, but the site currently consists of only a signup form.

Update 3: Invisipools has updated its website with a lot more information about its offering. The design seems different than Hidden Water, but still quite cool.