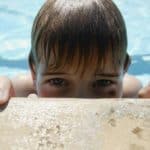 Need another excuse to get your own private swimming pool? According to a recent survey, about one in five people admit to peeing in a public pool. Yes, maintaining your own pool may be a hassle, but at least you generally don’t have to worry about people using it as a toilet.

But it gets worse. Far from being a harmless (if disgusting) fact of life, public pool urination could actually pose a health hazard. That’s the conclusion of a new study, which found that urine mixed with chlorine can result in harmful chemical reactions.

Scientists at China Agricultural University and Purdue University tested samples of swimming pool water combined with various other chemicals. Among them was uric acid, which is excreted from the body in urine. The study found that uric acid reacted with chlorine to produce cyanogen chloride (CNCl) and trichloramine (NCl3).

These two gases are bad news for anyone who spends a lot of time around swimming pools. Cyanogen chloride can cause damage to eyes and respiratory organs – so much so that it was once considered for chemical warfare. Trichloramine has been linked to asthma and other chronic health problems.

The study concludes: “Given that uric acid introduction to pools is attributable to urination, a voluntary action for most swimmers, these findings indicate important benefits to pool water and air chemistry that could result from improved hygiene habits on the part of swimmers.” That’s science-talk for “Don’t pee in the pool, people!”

You may have heard that if you pee in a public pool, a special dye causes the water to turn red or some other bright color. So if you don’t see plumes of colorful water anywhere, the pool must be clean – right?

Unfortunately, the existence of a urine-indicator dye in public pools is just an urban legend. Any dye that would react with urine would also be triggered by other organic compounds in the water.

That said, public pool operators do sometimes post signs informing swimmers of the presence of urine-detector dyes. That’s because making people think they’ll be exposed if they tinkle in the pool can be an effective deterrent. It’s also a way to give other patrons a false sense of security about the cleanliness of the water.

Other Health Hazards at Public Pools

If you haven’t already been scared into building your own pool, there are plenty of other health issues at public pools that will make you squirm. The same survey that taught us about pool urinators also reveals that most people don’t shower before jumping into a public pool. That means everything on their bodies – sweat, dirt, snot, and worst of all, fecal matter – go into circulation.

According to the CDC, some of the nastiest germs in public pools include Cryptosporidium, Giardia, Shigella, norovirus, and E. coli. These nasty bugs can live for days even in a well-maintained pool. Indoor pools and water parks are particularly prone to sanitation problems like these.

Naturally, private pools can also become health hazards if not properly maintained. But with less traffic and (hopefully) more respectful swimmers, you probably won’t spend all your time in your backyard pool wondering what’s floating all around you.