Pools and spas go together. Heck, half of the companies that deal in them have the words pool and spa right in their names. More to the point, pools and spas are often literally connected in high-end pool installations.

But for some people, the operative phrase isn’t pool and spa, but pool or spa. As in, should I get a pool or a spa? For one reason or another, it’s not always possible or sensible to get both – forcing a tough choice.

At the risk of spoiling the rest of this article, if you find yourself asking this question, a spa/hot tub is likely the better choice. Why? That will become clear as we look at all the factors at play in this decision.

Starting with the obvious, a spa takes up a lot less space than the usual swimming pool. Pools are typically 10 x 20 on the small end (though special designs can be smaller). Then there’s the pool deck, which is almost as important as the pool itself. While a pool is usually the centerpiece around which everything else is built, a spa can generally fit into a backyard with few adjustments.

It’s much easier to find a perfect spot for a hot tub/spa than a full-sized swimming pool.

Because of the size difference, a pool is more expensive than a spa made with comparable materials. You don’t have to be a pool expert to figure that out. However, what may not be obvious at first blush is that spas are also much cheaper to maintain. Less water means less money spent on chemicals. They’re also cheaper to heat in most cases, even with the higher temperature. Finally, because many potential home buyers don’t want a pool, you’re more likely to get your spa investment back when you sell your home.

How long is the swimming season in your area? In many parts of the United States, it’s less than six months. In contrast, you can use an outdoor spa year round, no matter how cold it is (at a cost of about $250 a year in heating costs, on average). In other words, unless you live in an area where you can keep a pool open year round, you’ll have more opportunities to use a spa. Hot tubs/spas are also easier to bring indoors, or into an enclosure such as a screened patio.

We’ve already mentioned space and cost, two areas where a pool requires greater commitment of resources than a spa. But to really understand how much commitment you’re looking at, it’s useful to ask yourself what would happen if you ever decided you no longer wanted your pool/spa. While you can simply drain and cover a spa, an inground pool is much tougher to “set aside.” If you leave it drained, the shell will eventually become damaged. If you don’t keep it clean and chemically balanced, it will become unsanitary. In short, whether you’re using a swimming pool or not, you’re on the hook until you move or have it removed.

As the previous points show, a spa is usually a smarter choice all things being equal. However, the most important factor of all – the one that can trump everything else – is you. Specifically, what are you looking for? Pools and spas may go together in many people’s minds, but they excel at different things. 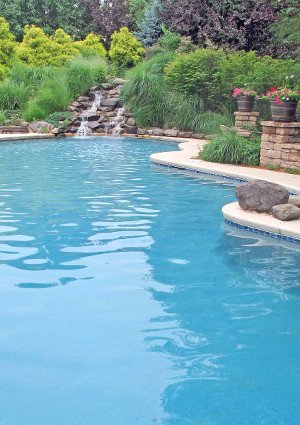 An inground pool is the centerpiece of any backyard.

Pools are great for:

Spas are great for:

To boil it all down, if you value a spa at least as much as a pool, then the spa is likely the better choice because of all the other factors involved. If you want a pool more, then your decision gets tougher. Only you can judge whether the additional costs and commitments of a pool are really worth it.