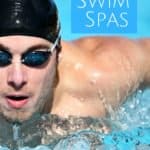 Swimming isn’t just fun, but also very beneficial to your health. But not everyone has the real estate for a swimming pool, and most backyard pools aren’t long enough for a proper workout anyway. That’s probably why space-saving swim spas are becoming more and more common in homes. For a less intrusive option, you can even get an inground swim spa – but as you probably expect, that will cost you extra.

Until recently, most people simply went to the gym to get a good swimming workout. However, more and more hardcore swimmers are installing lap pools in their backyard. For those who can’t accommodate – or just don’t like – the size or dimensions of a lap pool, inground swim spas represent a much more compact alternative.

A swim spa is essentially a treadmill for swimmers. High powered jets produce a current that allows you to swim in place, with controls to set the strength of the current and thus the intensity of the workout. Unlike a standard spa, a swim spa has a more elongated shape to provide room for exercising – and of course, it’s intended for colder water temperatures.

A swim spa isn’t just for swimming though. They’re also ideal for many other low impact workouts, and are a favorite tool for rehabilitation. Some of these “treadmills for swimmers” even include actual treadmills that allow you to walk against the current.

Not only do swim spas save space over a full sized swimming pool, but with their relatively small amount of water, they require far less maintenance. Just like swimming pools, swim spas come with a variety of different features. Some include an attached hot water spa, making the unit into a hub for both fitness and recreation.

Most swim spas are self-contained units that are installed above ground. They’re delivered to your home pre-plumbed and dropped into a convenient location. This is typically in the backyard, but they can also be installed indoors – provided, of course, there’s enough space.

The main disadvantage of above ground swim spas is that they’re bulky, and in at least some people’s judgement, unsightly. As a result, a self-contained swim spa often winds up in some out-of-the-way corner where no one will see it.

In contrast, an inground swim spa is something to show off. It offers a lower profile and the potential to either blend in or become a focal point. This superior “built in” look is the main reason to consider an inground spa over the above ground alternatives.

True inground swim spas are installed using modular components. These components allow installers to customize the spa as needed, while providing consistent function and performance. As you might expect, installation is more complicated when compared to self-contained units, but typically less invasive than inground pool installation.

As an alternative, you can also have a swim spa installed into a deck. Prebuilt swim spa shells are made of acrylic or fiberglass, and designed to drop into a cutout in an outdoor deck. This option gives you the same integrated look as a true inground spa at a cheaper cost.

Unfortunately, when it comes to inground swim spa cost, it’s impossible to name a figure that lands in the ballpark. Consider the fact that even standalone swim spas vary wildly in cost. Now add in the variables of different materials, models, locations (indoor vs. outdoor), and so forth that come into play with inground installation.

One thing we can say is that true inground spas generally cost more than inground spa shells designed for a deck, which in turn cost more than above ground units. An inground swim spa might also be cheaper than a full-sized inground pool, depending on what you’re comparing. And again, a swim spa saves space and maintenance work when compared to a pool – and that’s worth a lot.

As with any project of this type, the best way to save money on an inground swim spa is to research contractors in your area. Identify people who not only have a good reputation, but verifiable experience installing swim spas. Then get multiple bids to see who offers the highest quality at the lowest price.